The Abrahamic covenant is still in force. The administration of the Abrahamic covenant involved believers and their children (Gen 17). That’s why Peter said, “For the promise to you and to your children, and for all who are far off, as many as the Lord our God shall call” (Acts 2:39). That’s a New Testament re-statement of the Abrahamic promise of Genesis 17 and in the minor prophets (e.g., Joel 2). Only believers have ever actually inherited, by grace alone, through faith alone, the substance of the promise (Christ and salvation) but the signs and seals of the promise have always been administered to believers and their children. It’s both/and not either/or. 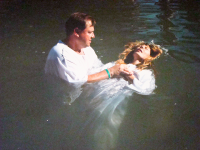 To observe this distinction one must first notice in Paul's statement that the inheritance of the covenant comes through faith, not through circumcision. The promise is based on faith; circumcision is based on the law. The promise is based on belief; circumcision is based on code. The covenant promise to Abraham, entirely based on faith, is completely distinct from the physical sign of that covenant, entirely based on the law. Also Paul says that the inheritance of the covenant promise to Abraham comes through faith, not circumcision. As for circumcision, it guarantees no benefits of the covenant promise to Abraham. It does not represent, guarantee, or symbolize that one is a child of Abraham or that such a child receives any of the covenant blessings of the promise. Paul is emphatic on this point when he writes, "This was to make him the father of all who believe but are not circumcised." The benefits of having Abraham as father do not come to those who are circumcised. Quite the opposite. The benefits of having Abraham as a father of many nations come through belief, not circumcision! That is because Abraham is the father of spiritual children, not physical. And it is upon this spiritual based promised that the covenant is built and benefits enjoyed, not on the physical sign of circumcision. It is for this reason that Paul said, "For not all who are descended from Israel are Israel."[Rom 9:6 HCSB]

Now remember that the promise to Abraham was that he would become the father of many nations. Those nations would represent Abraham's offspring, who are his children. The crucial question then is, who are Abraham's children? Who are his descendants? Those who believe. Not those who are circumcised. As Paul says in Romans 4, Abraham is the father of those who believe. Abraham is not the father of those who are circumcised. That is why Jesus said to the physical people of Israel, “If you were Abraham's children, you would be doing the works Abraham did."  And this is nowhere more clearly stated than by Paul in Romans 9, "That is, it is not the children by physical descent who are God's children, but the children of the promise are considered to be the offspring." Children who physically descend from believing parents are not necessarily the offspring of Abraham. Unless they believe, they cannot inherit any of benefits of the Abrahamic covenant reserved for his true offspring, Who is Christ, and those that are in Him. Paul explains this to the Galatians,

Now the promises were made to Abraham and to his offspring. It does not say, “And to offsprings,” referring to many, but referring to one, “And to your offspring,” who is Christ. (Galatians 3:16 ESV)

Circumcision did not mark someone as a descendant of Abraham or symbolize that they already were his descendent. Rather, circumcision was simply the sign that God would fulfill his promise to Abraham through the righteousness that comes by faith, in the work of Christ. Circumcision conferred no special privileges to the physical descendants of Abraham. Paul said very clearly to the Galatians, "For neither circumcision counts for anything, nor uncircumcision, but a new creation." All that matters, says Paul, are the benefits that come through being a new creation in Christ.

As to the argument that benefits are conferred through physical circumcision, this is impossible. The fact remains that only males were circumcised, not all children. If taken to its natural conclusion, only the males should have received benefits, because only they received the sign. Moreover, it was not the children of believers who were circumcised. Rather, it was every male born among them, and not even just their own children, but also the male children of slave parents who lived in an Israelite household. Even the male children of foreigners were included. Males and only males were circumcised, regardless of the belief of the parents. The parents could have faith or not have faith. There was no conditional requirement for faith. And not only the male children of Israelite parents, but the male children of slaves, who were not physically descended from Abraham. This destroys the paradigm given by Dr. Clark that the "administration" of the Abrahamic covenant involved believers and their children. By "administration" Clark means circumcision. But circumcision did not involve only believing parents and their children. It involved all parents, both non-believing and believing, both Israelite and non-Israelite. It did not involve their children. It involved only some of their children. It involved males only. The females were excluded. So the paradigm simply does not work.

Why then was circumcision administered to those outside of the Abrahamic covenant? Paul answers this in Romans 3,

So what advantage does the Jew have? Or what is the benefit of circumcision? Considerable in every way. First, they were entrusted with the spoken words of God.What then? If some did not believe, will their unbelief cancel God’s faithfulness?  [Rom 3:1-3 HCSB]


The only universal benefit of circumcision then, was that those who received it were part of a physical people who were entrusted with the spoken word of God, according to Paul. Circumcision did not confer any privileges of the Abrahamic covenant beyond that. Circumcision, then, is the sign (and only a sign) of God's promise of righteousness that comes through faith by the work of Christ, Who was to come as Abraham's Offspring. That was the covenant with Abraham. Circumcision was the sign that God would keep this promise, but benefits of that promise only came through those who believed. God has kept His promise, and now we look to the already-not-yet fulfillment of that promise in Christ as God's holy nation and royal priesthood, through whom there will not pass any who are unclean.